The Victorian Inn is one of the most historic hotels in Monterey, California, and a true reflection of the area's grand Victorian past. The origins of the stately Victorian house at the corner of Foam and McClellan, on the hillside above the rocky coast of New Monterey, date back to the early 20th century.

The first record of the unusually substantial house amid the jury-rig homes and semi-rural buildings that dotted the landscape of its time indicates that the Lang Family resided there as early as 1907. It's possible that Frank Lang, a carpenter, was the home's builder.

The decision to construct such an elegant Victorian house in that location reflected the early assumption that this area, with its sweeping views of the Monterey Bay, was to become an up-scale enclave. Even at the time, though, there were signs that the  ambition of the elegant Lang House and grand Murray-Tevis estate built on a nearby beach, was not the direction the area would move.

In February of 1908, the Lang House witnessed the purchase of the fish packing shed on the rutted coastal road below, by James A. Madison and Joseph Nichols, with help from another to-be-legendary name in Cannery Row history - Ben Senderman. This was one of the many indicators that change was coming.
Read More
The financially troubled canning operation of Harry Malpas, who built the first crude fish canning operation in New Monterey, had begun in 1901 with help from his Japanese connections at the Point Lobos Canning Company. The Japanese, in turn, had been working with A. M. Allen canning abalone since before the turn of the century. The new Pacific Fish Company venture of Madison, Nichols, and Senderman, however, became the first major cannery on what was to become Cannery Row. After its opening, things began to change rapidly. The Chinese settlement at China Point was destroyed by fire in 1906, and a new Chinese district had grown up on McAbee Beach, which included the Monterey Fish and Canning Company. This Chinese venture was Cannery Row's earliest reduction plant, which processed the fish cuttings from neighboring canneries into fertilizer. The Lang House managed to remain safely distant from the cannery sounds and smells until World War I when the demand for Monterey Bay's cheap and plentiful sardines (used as a civilian food staple and war ration) presented a windfall opportunity for the fledgling canning industry.

Monterey city leaders had, with good reason, forbidden any additional cannery construction in the harbor. City tolerance for the unsightliness and water pollution from the cannery, owned by Frank Booth, had reached its limit.
Read More
This meant that the only location for the cannery industry was on the rocky coastline of New Monterey, however poorly suited it may have been for access by the Bay's rapidly growing fishing fleet. Knut Hovden, the young Norwegian manager of Booth's Monterey harbor cannery, struck out on his own in 1916 and constructed the largest and most mechanized early canneries on Ocean View Boulevard. Wartime demand for Monterey sardines saw six additional canneries, as well as a major reduction plant, constructed along the coastline and forever changing the pristine water views once enjoyed by the Lang House. This industrial development left its mark that would last forever. With the expansion of fish canning and processing also came the rapid growth of the neighborhood around the lovely Lang House . The homes and buildings constructed at that time and onward were largely for the immigrant labor force of the canneries and surrounding industries. The elegant Lang House, which once stood alone on the open, rocky plane of New Monterey, was slowly enveloped in the sardine era's rough-hewn homes and commercial buildings.

By the late 1930s, it passed into the hands of one of Monterey's leading fishing families, becoming the home of Dominic Mercurio, skipper of the purse seiner Mercury. With the Mercurio family in residence, the stately Victorian stood witness as its neighborhood transformed into the "Sardine Capital of the World."
Read More
Because of its substantial construction, distinctive Victorian style, and attentive care for its condition, the house outlived many of its newer, less meticulously built, neighbors. Its survival into the modern era celebrates its unique place in Monterey history. Today, as the Victorian Inn it radiates the charm and luxury for which it was imagined over 100 years ago. It is in that spirit of grace that architect Paul Davis extended the classic Victorian style windows, roof shape, railings, and garden courtyards to reawaken the old Lang House as the Victorian Inn. Experience a vivid reminder of Monterey's grand Victorian past.
Sign Up for Special Offers 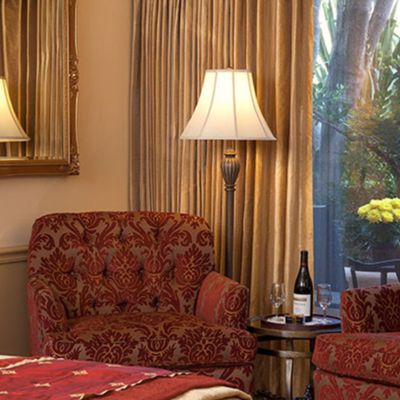